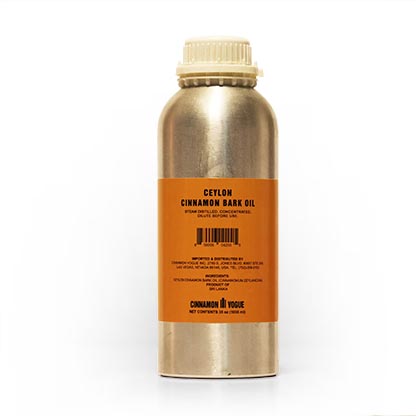 Premium quality authentic 100% Ceylon Cinnamon Bark essential Oil. Steam distilled with minimum of 60% Cinnamaldehyde. Perfect for aroma therapy and food flavoring. Just one drop added to a hot beverage delivers all the power of Ceylon Cinnamon with a scent that is truly mesmerizing.

Delivery and shipping - Delivery for this special order takes between 3-4 months due to quality control checks and lab testing. Discounts available for multiple bottles. Items are shipped by Fedex ground and not available outside the continental USA. A small amount of leakage (less than 0.5%) will occur during shipping. Do not order this item prior to calling.