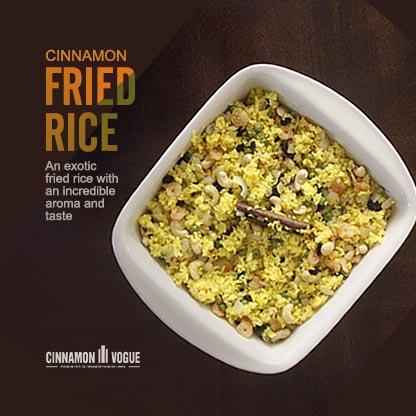 An exotic fragrant Sri Lankan Ceylon Cinnamon fried rice which is very different to Chinese fried rice. Infused with ingredients that gives it a rich fragrance and a light exotic flavor. The Turmeric adds a lovely light yellow color and delivers out standing health benefits as does Ceylon Cinnamon which are in the top 5 anti-oxidants you can have.

If you are having a party this is the dish to have because people will be impressed. One of the key thing about this rice dish is the amazing aroma of Ceylon Cinnamon and lemon grass. Unlike Cassia Cinnamon, Ceylon Cinnamon is not spicy but mild and fragrant and creates a fusion of flavor and aroma that is subtle and sophisticated.

Use a rice cooker or add the butter to a saucepan and heat for a minute at low heat. Add the rice, 3 cups water, salt, 1 Ceylon Cinnamon stick and 1/2 tsp turmeric and bring to a boil.

Then turn the heat to low, cover and leave for 15-20 minutes. The rice should be ready by then. Break up the rice and fluff it. Cooking the rice is tricky. You don't want it to be soggy but well cooked and dry. Sometimes it is better to cook the rice the day before so it is dry.

Next steps (to be done while rice is cooking)