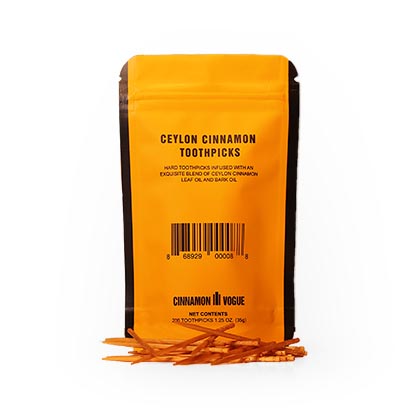 Ultra low Coumarin Ceylon Cinnamon toothpicks with a blend of Cinnamon Leaf and Bark Oil for spicy hotness and sweetness. We think we have made a sublime Cinnamon toothpick. In 2020 we have made it even stronger by adding extra oil. The Ceylon Cinnamon Leaf Oil gives it that super hotness and the Bark Oil adds flavor, aroma and a slight sweetness. Careful, they are hot but that is what our customers wanted, so we made it.

Why Cinnamon toothpicks? Well if you just had lunch with a girlfriend or boyfriend this could save the after lunch kiss. Not only does it freshen your breath, Cinnamon has anti bacterial properties that will reduce the amount of germs in your mouth.

Unlike the soft Birch wood normally used in toothpicks, these toothpicks are made with Hard Milkwood which are more durable and longer lasting and does not easily turn into a pulp that get stuck on your teeth like the cheaper birch wood. It also helps to better infuse with the Cinnamon Oil when we make it. The proper way to make a toothpick we think. For hours of satisfaction.

If you are a smoker, this is a real great anti smoking aid. Keeps the mouth busy with that hot taste. The more you chew the hotter it gets. Don't chew too much. Just to keep that edge off so you can quit.

Taste the goodness of 100% Natural, real Ceylon Cinnamon Toothpicks which are free of sugar and calories. Accept no substitute. Not the usual Cassia Cinnamon with its high Coumarin content. If you are chewing you might as well as get the good stuff.