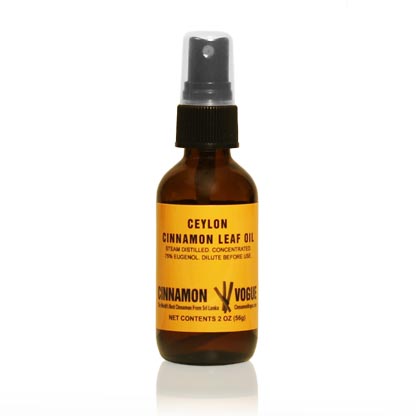 The World's best Ceylon Cinnamon Leaf Oil with minimum of 75% Eugenol, the critical ingredient that denotes quality and potency. With superior color, refinement, aroma and potency. The result of quality ingredients and an advanced steam distillation process.

Cinnamon Oil makes a great gift for friends, family or for yourself. Captures the invigorating essence of one of nature's most beloved and sought after extracts for your everyday living needs.

Often used for topical applications it is also very good to wipe down your house plants or use in damp toilets. Used in massage oils for its very high warming effects, Ceylon Cinnamon leaf oil also makes a powerful Ant and Raccoon repellent due to the powerful smell which is pleasant for people but not to insects and animals.

Cinnamon is a tropical evergreen growing up to 15m high, with strong branches and thick scabrous bark with young shoots speckled green-orange. It has shiny green, leathery leaves, small white flowers and oval bluish-white berries. The leaves have a spicy smell when bruised.

The Cinnamon Leaf oil is extracted by steam distillation from the leaves and twigs. The leaves left after trimming the cut stems, as well as those obtained from pruning operations, provide the raw material for production of cinnamon leaf oil. They are usually allowed to dry for a few days before distillation. Traditional stills in Sri Lanka are large wooden vessels capable of holding up to 200 kg of leaves, on top of which is a copper still head. Steam is introduced from a separate wood-fired boiler. In some cases, all-metal vessels are used and water-steam distillation is employed.

Cinnamon Leaf Oil has a powerful spicy aroma, with a strong similarity to cloves with undertones of citrus.

Cinnamon Leaf essential oil, Cinnamomum verum, is relatively non-toxic; possible irritant because of the cinnamaldehyde in the oil. Eugenol the major ingredient in Cinnamon leaf oil is also an irritant to the mucous membranes (i.e. lips): so use in moderation.

Can be a skin irritant, redden, and even burn sensitive skin so use carefully (no more than half drop per bath for example) Avoid in cosmetics and during pregnancy. Ceylon Cinnamon Leaf Oil has significantly less Coumarin (known to be toxic in relatively high doses) than the common Cassia Cinnamon.

Why do we use a spray mister bottle top instead of an eye dropper if you have to dilute it?

Because many people use a squirt of 100% cinnamon Oil as an odor neutralizer in the toilets or to wipe down counter tops. Also if you don't have a spray mister bottle to dilute and use, you can empty the oil into a clean bottle and use the same bottle that the oil comes in.

REVIEWS OF OUR CINNAMON OIL


Try it, I think you'll like it. Look the product up on line and it lists all the practical uses.
By prile on August 6, 2013

The FDA does not grant approval for natural essential oils but only for drugs that claims a specific cure. Which is why we cannot claim that Cinnamon cures anything. However they do have a database of essential oils under the generally accepted as safe (GRAS) category where Ceylon Cinnamon Leaf Oil is listed as safe. Click the link below to visit.

CAN YOU CONSUME CINNAMON OIL INTERNALLY?