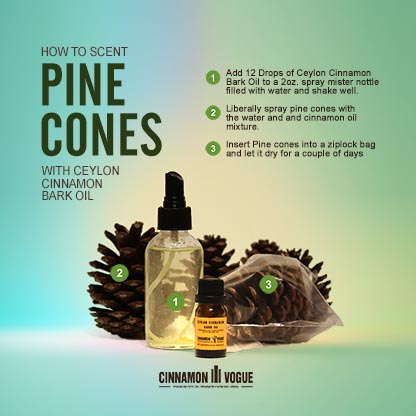 We show you the proper way to make Cinnamon scented pine cones with authentic Ceyon Cinnamon Bark Oil. It gives off a wonderful aroma and gets rid of any insects lurking inside the pines cones. Perfect for making fabulous Christmas displays for the house. Give it as a gift to friends and family.

Nothing beats the exotic scent of authentic Ceylon Cinnamon bark Oil which has the of true scent of Cinnamon unlike Cassia Cinnamon Bark Oil which is the pretender to the throne. A tiny bottle of Ceylon Bark Oil goes a long way and can also used for scenting the whole house as well or for flavoring food.

The tradition of scenting pine cones originated as a form of natural insect control. Pine cones can have tiny insects, spiders and other creatures living inside them. Real Cinnamon Oil has powerful has anti-bacterial properties as well as insect repellent and killing properties. Spraying the diluted oil and sealing it in a zip lock bag will get rid of any unwanted insects and disinfect the pine cones.

Unlike ordinary Cassia Cinnamon you find in the stores, Ceylon Cinnamon has low Coumarin levels, so it won't damage your liver, especially if you are a regular Cinnamon tea drinker. Besides Ceylon Cinnamon is mild, yet slightly sweeter. It's not spicy like store bought Cassia Cinnamon, but has hints of cloves and citrus with wonderful subtle aroma.