GET RID OF BLACK ANTS WITH CINNAMON OIL 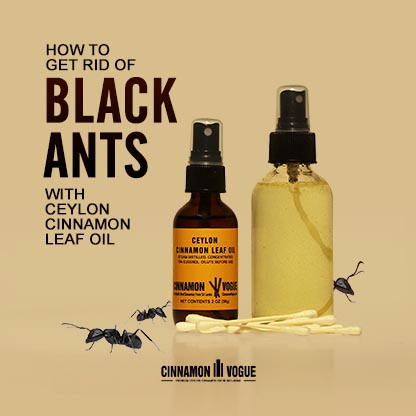 HOW IT WORKS AGAINST ANTS

Disrupts ant communication - Cinnamon leaf oil upsets an ants sense of smell. Ants rely on a chemical scent known as pheromones to find food and send signals back to home base. That is why within minutes of you leaving a gooey syrup on the floor the ants are there. When you spray Cinnamon Oil, it destroys an ants communication system so ants avoid Cinnamon Oil. Eugenol is the magic ingredient in Ceylon Cinnamon Leaf Oil that makes it so effective. And ours has a minimum of 75% Eugenol which is near the maximum you can get.

Anti microbial/Anti bacterial - A 100% Ceylon Cinnamon Leaf Oil solution will instantly kill an ant on contact. It will burn them. Even diluted to 1% the scent is very powerful to ants. The trick is to use it judiciously. Dilute it to wipe down food preparation surfaces so the scent of food is not broadcast to ants and use a 100% cinnamon oil to create an ant exclusion zone.

Ideally you want to find the Queen ant and kill it with 100% Ceylon Cinnamon Leaf Oil but this easier said than done. In the meantime the best you can do is keep them out of your house.


WHY CINNAMON LEAF OIL FOR ANTS

Cinnamon is well known to repel ants. Our Leaf Oil packs 100% times the power of cinnamon powder or sticks. It's not fool proof but used correctly it is safe, cost effective, all natural and works 99% of the time.

Our high quality 2oz Ceylon Cinnamon Leaf Oil bottle should last you a long time. A tiny amount goes a long way. It's not the usual diluted or blended Cinnamon Oil or synthesized Cinnamon extract. It also has a lovely exotic scent.

Blacks ants are common in dry areas or where there is sandy soil. They are approximately .06 inches long and can be a real nuisance. Their stings are mild but technically they can still contaminate your food and transmit disease. They love anything sugary, nectars, flies, dead roaches, small insects and fruit.

Although they are mostly black in color, some can be a light brown color. Black ants are social creatures, living in colonies of Queens, males, larvae and infertile female worker ants. When a Queen brings her colony into a house, the infestation is mostly annoying and does not usually represent a health threat. But you should get rid of them because they get into food and ruin it.


These are larger black ants, also called carpenter ants that represent a serious problem. They nest above ground in cavities and can destroy the materials (structural wood, insulation, sheathing and so forth) that surround their nests. Thousands of dollars in damage can be caused by a single carpenter ant nest as it grows. Usually they forage outside the house for food and water. However during late winter and early spring they can come into your living space, looking food since an outside source of food is not available at these times. They are scavengers and predators who will take whatever food they can find.

1. Regular Inspections - Inspect the exterior of your whole house (including roof) regularly especially during the warm months, Look for ants moving around in a single file and trace it back to the origin.


2. Remove Plants - Do not put plants against the exterior walls of the house. It should be at least 12 inches away as ants can use plants as a bridge to jump over any perimeter treatments.

3. Clean Crawl Space - Keep the crawl space under your house clean and free of any debris so it is easy to check and does not create any nooks and crannies that ants can build colonies under. Block off any entry points so animals don't get in, die and offer plenty of food for the ants.

To date we have only used Cinnamon Leaf Oil to control only black house ants and the larger black carpenter ants. We have not tried it with red ants. It is certainly worth a try. But since it's outside, a commercial bait is a good risk, unless of course you have children who will play on the soil that you will put the bait on.

Here is a fast, effective and natural way to get rid of those pesky black ants in your house with Ceylon Cinnamon Leaf Oil. Annoying and frustrating black ants get into everything. Are you hesitant to spray powerful chemicals in the house, particularly with children and pets around? Then give our Ceylon Cinnamon Leaf Oil a try. The all natural solution. But you need to follow the rules exactly. If you cut corners then it won't work. Relax it is not a lot of work. Just simple rules.

HOW TO USE CINNAMON OIL FOR BLACK ANTS

Step 1 - Before you wipe down the ants, first follow the ant trail and find out where they are coming from. This is usually from underneath baseboards, from behind kitchen cupboards, a window or door. Once you find the entry point, dip a Q tip into 100% Cinnamon leaf Oil and draw a line. This will block more ants from coming in. If you are marking hardwood floors use diluted Cinnamon (1% with water) to prevent any staining.

Step 2 - Mix 1% Cinnamon Leaf Oil with 99% water in a fine spray mister bottle and wipe down the ant trails quickly starting from the entry point to their final destination. Do not spray all over the place. Just the ant trail.

Step 3 - Vacuum the whole house. If you snack in your bed, home office desk and the computer keyboard or sofa, chances are there are food particles, which attract ants. Kitchen cupboards often have spilled food like syrup. Clean and vacuum these areas. A hand held mini vacuum is always useful.

Step 4 - Spray the diluted cinnamon oil and wipe down with a wet micro fiber cloth all Kitchen cupboards, tables, counter tops, coffee tables or anywhere there has been food. This will eliminate any lingering food smells or ants.

Step 5 - Dip 100% Ceylon Cinnamon Leaf Oil with a Q tip and mark the inside perimeter of the house with 100% Cinnamon Leaf Oil. A thin line of cinnamon oil will do but make sure it is an unbroken line. Ants will not cross the cinnamon oil line but they will find any weaknesses in your defenses and go around. That means all around your baseboards, doors ways, windows or any other entry point into the house.


Spray and wipe down down your garbage can with diluted Cinnamon Oil. It get's rid of odors and prevents ants from climbing into your trash to look for food. You can also mark the perimeter of your trash can with a Q-tip dipped in 100% Cinnamon oil.

As with all things ultra pure & concentrated, Cinnamon Oil should be diluted to 1% so it won't irritate your skin or if you are spraying it on food like fruits.

Wear gloves when you handle concentrated Cinnamon Oil. It's hot like Chili powder so if you get it on your hand in concentrated form it will start irritating your skin like the sensation you get with Chili powder.

Wash you hands with soap and water if you touch the concentrated oil. And don't touch your genitalia (guys take note). We forgot to wash hands and were hopping around for a while.

The smell of our pure Cinnamon Oil is concentrated and extremely powerful. Avoid smelling it directly when undiluted because you can become a bit light headed by the power of it. In some people the heart rate can go up so it is important that you dilute it before smelling it.

Pregnant women should not eat or smell cinnamon, especially the oil as it may cause premature uterine contractions 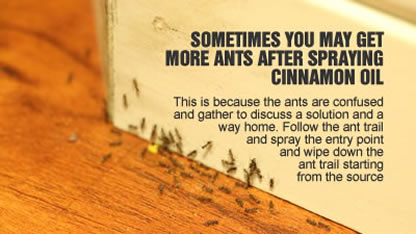 After I sprayed Cinnamon Oil there are a lot more ants. I thought it was supposed to repel them.


This is a very common occurrence especially if you are not systematic with the process, What happens is when you spray Cinnamon Oil all over the place without thought, the ants get confused.

When ants get confused, they get together and try to discuss how to get out of the situation. The picture above shows this happening. We sprayed the entry point and watched to see what happens. The ants just bunched up and went all over the place looking for an exit strategy. This is why it is important NOT to spray Cinnamon Oil all over the place. It must be used strategically. If you get this situation check the following:.

For the more serious carpenter ants, apply the all 1% Cinnamon Leaf Oil mixture into exterior wall voids and completely around the structure. This creates a barrier that ants will not cross to forage for food. A wall void is the space between the wall studs (the wood pieces) that are filled with insulation. Sometimes you will just have to drill into these wall voids, spray the cinnamon oil and then reseal it.

You might have to or want to increase the spray dilution ratio to 5-10% for exterior applications. Yes that is stronger than the 1% indoor spray solution to take into account of the higher evaporation rate of the outdoors. The ratio to mix is a judgment call based on striking a good balance between cost and effectiveness given various environmental conditions like wind, rain, humidity and the like. If you have a crawl space under the house you will have to get underneath to inspect and spray.