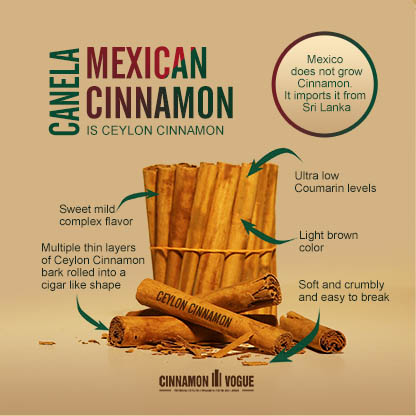 Mexico inherited this Ceylon Cinnamon tradition from Spain which brought a variety of spices from the orient including Ceylon Cinnamon. With this they created multi layered flavors, where Cinnamon is an essential flavor but never takes center stage.

Mexican Cinnamon sticks are sweet, mild and has a more complex flavor compared to the common Cassia Cinnamon found in the USA. They are made with soft layers of Cinnamon bark from the Cinnamon tree, rolled like a cigar and light brown in color. Cassia Cinnamon is a darker brown color and very hard. Mexican cinnamon is delicate and fragile and easy to break apart. Often a bit of the stick is broken and added to many Mexican recipes. Other times it's ground into a fine powder for more complex recipes like Mole.