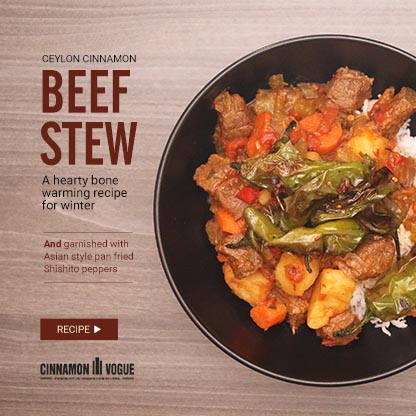 We added brown sugar but this is not necessary as the Ceylon Cinnamon adds the sweetness. Cinnamon is a great sugar substitute as everyone gets away from sugar.

This a complex recipe but well worth it when you want something deep down satisfying. It has many ingredients which takes time to assemble. Make it on an early Sunday morning. Get up early, take time to prepare, Then curl up on the sofa with a good book while it cooks. By Lunch time it is done. Sip a glass of red wine when the carrots are cooking in the final stages. . Serve it with Rice, Couscous or rustic bread. But we discovered pairing this with Asian style pan fried Shishito peppers is a great combination. And the leftover is great to take to work on Monday.

For Crock pot: Put browned beef and all remaining ingredients in crock pot. Stir and cook on low for 10-12 hours, adding more water or stock if stew appears too dry or you want more juice.