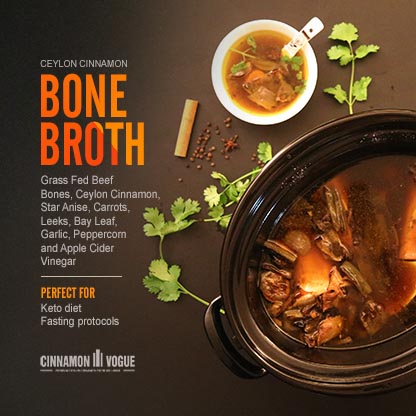 Try this rich nutrient dense bone broth with a hint of Ceylon Cinnamon and Star Anise for fasting and the Keto diet. Ceylon Cinnamon adds a wonderful ever so subtle flavor to the beef and scrubs the taste of Apple Cider Vinegar.

Adding Ceylon Cinnamon and Star Anise also helps get rid of any bacteria and other nasty things in bones. That means we don't have to blanch it, which we feel takes out all the goodness. And we went easy on the Apple Cider Vinegar with just enough to break down the bone and collagen. It worked extremely well in this ratio. A touch of lemon juice can also help breakdown the bones like Apple Cider Vinegar and works well with cinnamon to create a richer flavor.

Bone broth has been touted as the latest greatest health food. That is probably an exaggeration. But a little bone broth from time to time is apparantly good for bone health (has calcium, magnesium and phosphorus), joint health (osteoarthritis) and sleep (due to Glycine). It is good for breaking a fast due to the nutrient density. And because of the fat (gelatin) and it is a great addition for people on a Keto diet as it keeps you satiated for long. We had half a cup and was not hungry for 24 hours. And you can use bone broth for cooking. Sauté vegetables in it, add to meats, cook rice or cauliflower with it and so much more. And scoop up the bone marrow from inside the bone which is a good source of Vitamin K2 that is apparantly good to reduce plaque build up on teeth.