WHICH CINNAMON IS GOOD FOR YOU 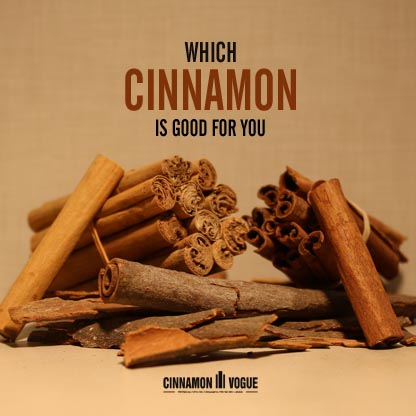 We take a look at which Cinnamon is good for you by analyzing the various types of Cinnamon such Ceylon, Cassia, Saigon, Korintje Cinnamon. While there are hundred of variation within the Cinnamon family, only 4 types or varieties of Cinnamon are used for commercial purposes.

Cassia, Saigon and Korintje Cinnamon are classified under the Cassia Cinnamon category because they are very similar to each other with only slight variations in color, taste, shape and Coumarin content. All Cassia type Cinnamon have a hard thick bark and have high levels of Coumarin, a substance known to cause liver damage, while Ceylon Cinnamon is the only soft and brittle Cinnamon with ultra low Coumarin levels.


Most of Europe used Ceylon Cinnamon primarily because this was the first spice European explorers (Portuguese, Dutch and British) brought back from their conquests of Ceylon (Sri Lanka) nearly 400 years ago. But cheaper Cassia has made inroads and has come to dominate the market.


WHICH CINNAMON HAS LOW COUMARIN

At one stage the German government banned Cassia type Cinnamon. But take a closer look at this university of Mississippi study which shows the high levels of Coumarin in all other types of Cinnamon, except Ceylon Cinnamon.

Around 70% of North America uses Cassia Cinnamon. Indonesia is the chief supplier of Cassia Cinnamon. This is because it is much cheaper than Ceylon Cinnamon which tends to be expensive because of the hand crafted process needed to harvest it and roll it in multiple thin layers. Cassia Cinnamon is a hard bark that is spicy, smells pretty strong and sometimes bitter.

This is another Cinnamon which has gained in popularity recently. Originating in Vietnam this cinnamon admittedly makes a good first impression in terms of sheer aroma and taste. It tends to be even more spicy and strong and sweet at the same time. It's a little more expensive than Cassia Cinnamon but has the highest levels of Coumarin.

The quality of Chinese cinnamon is not great. While part of the Cassia Cinnamon family it tends to be more pungent, less sweet and slightly bitter. Possibly because of the soil conditions. Cinnamon quality can vary depending on soil conditions. Most Chinese Cinnamon probably stays in China, used in many of the Chinese medications for coughs, phlegm and other illnesses.

Ceylon Cinnamon grows best in sandy soil. The tree grows to about 49 feet in its natural state but is cut earlier for commercial purposes. It has a thin bark. The leaves are shiny and leathery on top and dull on the underside. The flowers are white with an oval sized fruit which becomes bluish with white spots when ripe. The leaves when crushed are spicy and hot to taste while peeling away the outer bark of the tree yields a very strong cinnamon smell.

While the US FDA banned us from discussing the health benefits of Cinnamon or even listing the 50 plus research studies on Cinnamon, we can say in general terms, Ceylon Cinnamon is remarkably good for you.

The most potent form of Ceylon Cinnamon is of course the Ceylon Cinnamon Bark Oil, followed by the sticks and then the powder. Yes you can ingest high quality Ceylon Cinnamon Bark Oil. Adding 1-3 drops of the Bark Oil to tea, coffee or our signature Ketocino drink which you can make at home, has excellent benefits. Why? Because it has extremely high levels of Cinnamaldehyde (approximately 76.8%) the magical ingredient that makes Cinnamon so special. It is fairly spicy hot and also has an earthy sweetness to it without any sugar.

For those who do not like spicy hot, then Cinnamon sticks are a good solution. Of course using them short of boiling it into Ceylon Cinnamon stick tea or adding to stews, it is not the most practical for busy people. That means the Ceylon Cinnamon powder is a good choice, providing convenience albeit without the same levels of potency as the Bark Oil.

For fine desserts Ceylon Cinnamon is an absolute must because it is subtle, smells very mild and is slightly sweeter in taste. It never takes center stage in the recipe but adds a very complex flavor. Although Ceylon Cinnamon smells mild, if you grind and add it to baked goods or Cinnamon French toast for example, the aroma it gives off is a very sophisticated and fragrant. 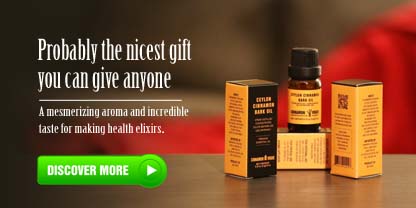