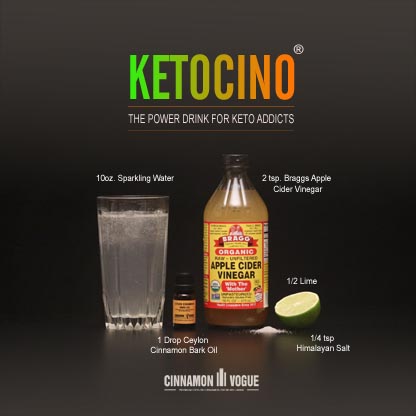 They key thing is to not put more than 1 drop of Ceylon Cinnamon Bark Oil as it is pretty hot and will burn your lips if you put too much. At one drop, it will give a slight tingling sensation on the lips (Oil does not mix well with water unless it is hot) and a slight sweetness, although it has zero sugar in it.

Some people will put more, but be warned it will drop your blood sugar levels extremely fast if you put too much (not to menton being really hot on the lips) and you will feel faint and dizzy, especially if you have not had anything to eat. However if you want to burn sugar, this is the ultimate drink.

We also used S. Pellegrino Sparkling Natural Mineral Water (Wikipedia) which surpisingly has high levels Magnesium, trace amounts of Pottasium, good levels of Calcium and a fair amount of Sodium, all essential for your health, especially the Keto diet.