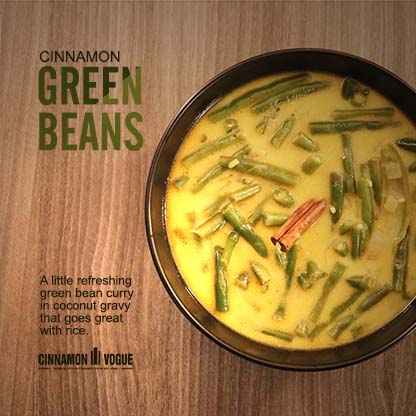 A green bean curry with Ceylon cinnamon from Sri Lanka. This has been modifed a little bit to make it a little lighter but still retain that creamy coconut gravy taste. Delicious with a bowl of white rice and a slice of roasted chicken or stir fried beef cubes. The Ceylon Cinnamon and the light sprinkling of spices adds the flavor and the lime juice at the end gives it a delightful fresh clean taste.

WHAT SPICES MEAN TO YOUR HEALTH

Turmeric - Reduce the chance of cancer, detoxify your liver and aids in fat metabolism.

Cumin - An excellent source of Iron to keep your immune system healthy.