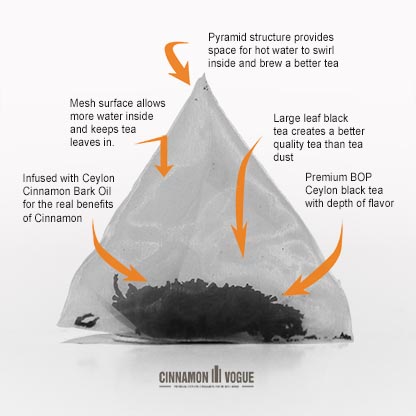 Our Ceylon Cinnamon tea uses a pyramid tea bag to provide space and velocity to brew a cup of tea as good as loose leaf tea. When you taste our tea, you will suddenly realize why our Cinnamon Tea is spectacular. It uses real Cinnamon, unlike many pretenders to the throne who blend different types of Cinnamon and others spices, diluting the taste of Cinnamon. And this is not just ordinary Cinnamon, this is Ceylon Cinnamon, acknowledged to be the World's finest Cinnamon or true cinnamon with a sophisticated flavor that Cassia Cinnamon simply cannot match.

Imagine if you can find a tea bag that is as good as brewing loose leaf tea? Well now you can, thanks to an ingenious piece of engineering called the Pyramid Tea Bag..

Those who know tea understand that large leaf tea is of much better quality than the garden variety supermarket tea bag. Most tea packed into tea bags are tea fragments and tea dust of inferior quality. Tea dust gives off good color but lacks the fully body taste and flavor of a large leaf tea.

Normal tea bags often use a paper substrate, which does not allow the efficient inflow of water into contact with the tea. Secondly, the inside space of a normal tea bag is very limited. That almost necessitates the use of Cinnamon dust because large leaf teas expand to three times its dry volume. So if you put large leaf tea in a normal tea bag, it would explode as it brews.

Pyramid bags are made from nylon strands that are woven into a small net-like mesh, creating holes in the bag much larger than conventional paper bags. These larger holes allow for water to come in contact with more of the tea’s surface area, thus releasing more essential oils and character of the tea into the cup.

The unique triangular structure of these bags allows for the tea to move around freely inside. When the tea comes into contact with hot water, the leaves naturally move in circles as they heat and cool. This freedom of motion makes a pyramid bag functionally the same as a larger cup or loose leaf infuser, making the high-quality flavor of loose leaf tea conveniently available in a pouch that anyone can brew.

When we were designing this tea with a major Sri Lankan tea manufacture, we discovered most tea manufactures use natural or artificial flavoring. This is because flavoring is cheap. Our research indicates flavoring whether artificial or natural has none of the goodness of the real thing. The only way to get the real thing is to use a whole Cinnamon stick which would not fit inside a tea bag. A few flakes of Cinnamon chips inside the tea bag was just not good enough.

So we turned to Ceylon Cinnamon Bark Oil, which is extremely expensive but well worth it. When you taste this tea you will understand how good Cinnamon Bark Oil is. And not to worry it does not leave any oily residue. Cinnamon Bark oil is so refined only a fraction is needed to have a major effect. Not only does it give off the most alluring and exotic of aromas it delivers all the benefits of real Cinnamon.

If you look at the cut away picture on top , you will see that we infused premium quality large leaf tea inside this tea bag. Ceylon Tea is World renown as the best black Tea in the world. This is because the climate conditions for growing black tea is better in Sri Lanka than anywhere else in the world. The depth of flavor in this tea is second to none. Made with Broken Orange Pekoe Tea through a careful selection process. This black tea was specifically chosen to match the refined taste of Cinnamon Bark Oil. The result is without a shadow of doubt the best Cinnamon tea in the world. With Zero flavoring. Try it!