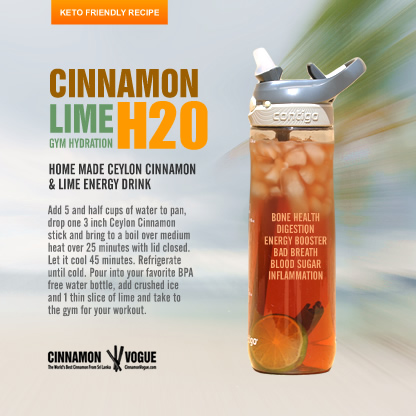 Try this Cinnamon Lime Gym Hydration Formula made with Ceylon Cinnamon, water and lime. The perfect Keto diet friendly drink to keep you hydrated at the gym.

Ceylon Cinnamon addresses one of the core causes of low energy levels. Extremely high or low blood sugar levels. Too much sugar in the diet or disorders in the liver can interfere with the storage and release of sugar. A rapid rise and fall of blood sugar more often than not causes headaches, mental confusion, violent outbursts, or depression because a person has no energy to cope with their responsibilities.

Two sticks of Ceylon Cinnamon also has very good levels of Manganese. (73% Daily value). We used 1 stick for this formula, so the daily value should be in the region of 14.6% per cup since we used 5 cups of water. Not bad we think. Manganese ensures a healthy bone structure, bone metabolism and building essential enzymes for building bones. Other benefits include forming connective tissues, absorption of calcium, proper functioning of thyroid, sex hormones, regulating blood sugar levels, and effective metabolism of fats and carbohydrates.

Ceylon Cinnamon is a natural disinfectant. So is lime. Together it will leave your mouth feeling clean and fresh. And both have anti inflammatory properties, which is great for the gym as your muscles get a heavy workout. And both Cinnamon and Lime promotes digestive health.