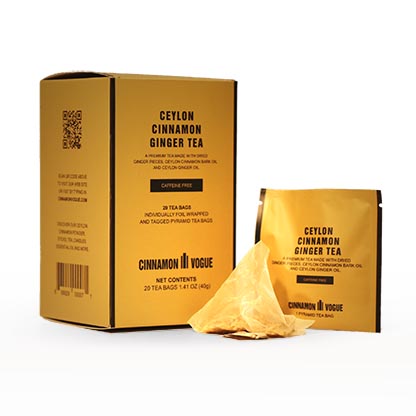 A premium quality Cinnamon Ginger tea with the throaty back note that is unmistakably Ginger. For those who want a refined caffeine free herbal tea with real health benefits. When you open the tea envelope you will be greeted with an aroma that will instantly tantalize you. After you drink it you will notice the body achieve a sense of rest as it heals.

Sure it is not will give you the kick of caffeine like in our famous Ceylon Cinnamon black tea, but it still packs a punch. Whether you got jet lag or a stomach ache this tea will reset your system like no other. And the perfect solution for peaceful sleep when you are tired.

These pyramid tea bags are Individually sealed in a premium quality envelope to maintain freshness. Makes it so easy to pop it in your bag for travel. Keep it in the car for emergencies. It will save you.

Probably the nicest thing about this tea is that it pairs perfectly with a rich decadent dessert. The properties of Ginger and Ceylon Cinnamon are well known to scrub the guilt of sugar and cleans the palate.

And finally unlike our black tea which you can only brew once, you can keep adding hot water to this tea bag throughout the day. It still maintains much of its initial potency. In fact some say it gets stronger as the dried ginger slowly releases it's power.

We spent 3 years developing this Cinnamon Ginger Tea for our customers who wanted a light refreshing tea for the evening, without caffeine but still delivered the health benefits of Cinnamon and Ginger. The result is a sublime tea with dried Ceylon Ginger pieces infused with premium quality Ginger Oil and Ceylon Cinnamon Bark Oil. All from the pristine Island of Sri Lanka where the quality of ingredients are far superior due to the weather and soil conditions.

Dried Ceylon Ginger - Ginger from Sri Lanka has that much more flavor due to an unspoilt natural habitat and lush tropical conditions. Carefully selected and dried to be used as the base for the tea.

Infused with Ginger Oil - Because the dried ginger is not strong enough, we decided to add Ginger Oil into this tea. Then we went further and used a Ginger Oil with 29% Gingerol. That is the highest quality Ginger Oil you can get. Gingerol is the primary bioactive compound responsible for its medical properties. It packs a punch and delivers an aroma and taste that is strong yet refined.

Do not use this tea for morning sickness when you are pregnant as Cinnamon may cause premature uterine contractions.

New product. Reviews are not available yet. Please review this tea if you buy. All reviews good or bad will be published.