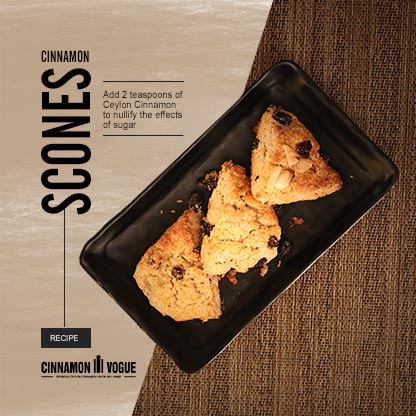 Sometimes we want a baked scone. The problem is the sugar and flour.  Adding 2 teaspoonscinnamon, especially Ceylon Cinnamon makes things sweeter but it also has another effect. It is well known reduce blood sugar levels. Imagine that right? But Ceylon Cinnamon goes further. It adds a wonderful aroma and a deeper flavor. Try it. You will be amazed.

Mind you this is an American scone which has more sugar and not a British scone which has less sugar so they can put jam on top. We promise it will not be overpoweringly cinnamony since Ceylon Cinnamon is mild and fragrant. So a win win at all levels. And this recipe is so easy to make.