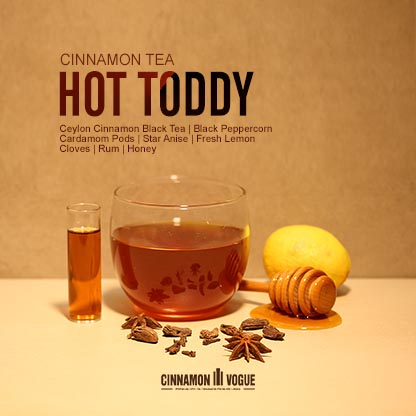 This is the ultimate Cinnamon tea hot toddy that comes from the British and Sri Lankan tradition. The miracle elixir that will drown out the worst sickness.

Apparently heat, spice and the sweet and sour taste encourage mucus production. Ceylon Cinnamon is a powerful anti bacterial that should clean up your insides. The large leaf Ceylon Cinnamon black tea adds to the amazing antioxidant power of Ceylon

.The rum will knock you out and help you sleep so your body can use all the energy to fight those pesky bacteria and viruses. More importantly this drink gives you a psychological boost, warming, and comforting you on a bitterly cold and wet day when you feel like death itself. The scent of star anise is exotic and powerful. Ceylon Cinnamon takes it to another level, while the Cardamom pods, cloves and black peppercorns work their own magic. Honey acts like hydrogen peroxide and brings to the surface all the embedded bacteria and lemon adds a touch of flair and its natural healing properties.

Each spice is necessary. Together they launch a multi pronged attack that will get you well in no time and give you an opportunity to get some much needed rest. But the best part is that it tastes so good. It is almost worth getting sick to enjoy this.