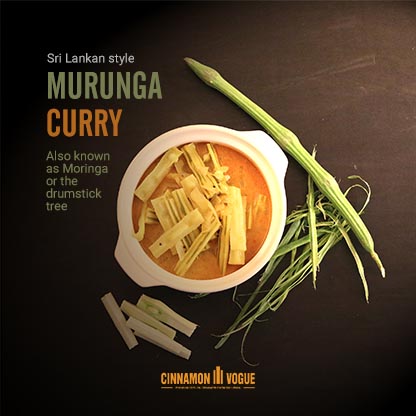 This Sri Lankan style Murunga (Moringa) curry is one of the most most delectable healthy savory dishes you are ever likely to encounter. Infused with Ceylon Cinnamon, Tamarind, turmeric and other select spices. Also called the drumstick tree, the Moringa tree is quite unusual to western eyes.

The only way to eat it is with rice. Sorry low carb friends. But the health benefits will negate any downsides of carbs. According to healthline the Moringa sticks have high levels of Vitamin C. Discover more about the whole Moringa tree from this beautiful illustration Whatever the benefits of Moringa the amount of spices in this recipe especially Ceylon Cinnamon, Turmeric and curry leaves is bound to deliver a high dose of health.

While the sticks are cooked with the seeds you generally do not eat them as they are bitter. You have to get your hands dirty as you hold the stick with your hands and then scrape off the soft inner flesh with your teeth. The curry sauce get infused with the taste of the Moringa, giving it a savory creamy tasty with the addition of coconut milk. Which is why rice works well to soak up the curry gravy. Once you eat the soft flesh, you can tightly suck on the drum stick to get all the remaining juices out of it.