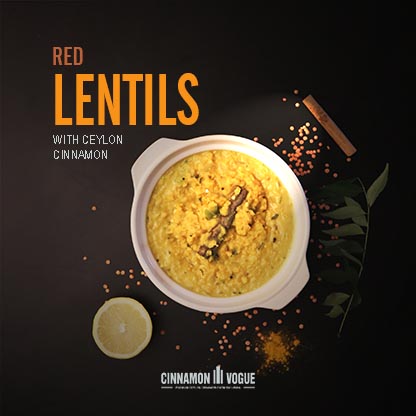 Discover the art of making this tasty Sri Lankan red lentils recipe also known as Sri Lankan dhal curry with Ceylon Cinnamon. It has an invigorating aroma and a light refreshing creamy taste profile. The magic is in the subtle use of spices. It's not heavy like Indian curries which tend to be too spicy.

What makes this dish unique is the infusion of mild yet aromatic Ceylon Cinnamon which never takes center stage but adds to a wonderfully complex flavor. Each of the spices from the black mustard seeds to the curry leaves is well known to lower blood sugar levels, so consider that an addtional bonus.

The coconut milk is self-indulgent but adds a creamy sophistication. The curry leaves too add an exotic aroma and flavor. You have to try and find curry leaves to see what we mean. Indian stores in the US carry curry leaves in small packets which can be frozen. Fresh is much better of course.

Red lentils are high in protein and very tasty especially in this combination. This is a dish that can be eaten with rice, bread, pasta, roti or even simply paired with a steak and vegetables. But to make it taste great you must follow these sequence of instructions to the letter.