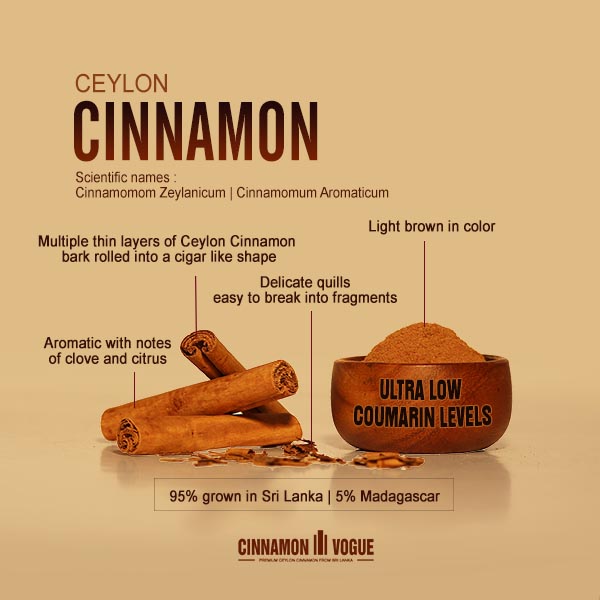 WHAT IS CEYLON CINNAMON

Ceylon Cinnamon Sticks looks like a fine Cigar. Made by rolling multiple thin thin layers of the Cinnamon Bark (Cinnamon quills) into a cigar like shape which vary on length from 2-8 inches.

Cinnamon Powder is made from Cinnamon sticks which are ground into a fine powder. This powder is always added to Sri Lankan curry powder as well as sold on its own for making fine baked goods.

Ceylon Cinnamon is native to the tiny Island nation of Sri Lanka. Also called True Cinnamon, only Cinnamon grown in Sri Lanka can be considered the real thing. This is because the exact climate conditions where it grows is very unique.

Even in Sri Lanka Ceylon Cinnamon is grown only in particular areas, which is in the Negombo district, south of the capital Colombo. The major cities that produce Cinnamon are the coastal cities of Galle, Matara, Rathnapura and Hambantota.The climate in these cities gives Sri Lankan Ceylon Cinnamon its unique taste and smell. And the quality of the Cinnamon harvested in this particular region is extremely high.

its role in many recipes is to add depth of flavor and character. In fact you would be hard pressed to know that the recipe had Ceylon Cinnamon in it. But recipes that use Ceylon Cinnamon create some of the most memorable taste sensations.

THE AROMA OF CEYLON CINNAMON

Ceylon Cinnamon is more aromatic than Cassia Cinnamon, especially when heated. It has a wonderfully sophisticated aroma. Make pancakes with Ceylon Cinnamon powder and sugar and you will know what we mean. The aroma wafts into the air.

One of the most important characteristic of Ceylon Cinnamon is its ultra low Coumarin content (0,04%), a substance known to cause liver damage. Cassia Cinnamon by contrast has 4% Coumarin. The German and European government for example severely restrict Coumarin content. For more information on Coumarin from the German BfR click here . We also did a blog post in Coumarin in Cassia Cinnamon which you can read here. 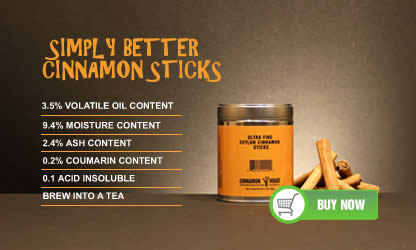 
HOW IS CEYLON CINNAMON MADE


Ceylon Cinnamon sticks are made by first cutting the thin branches of the Cinnamon Tree. The branches actually shoot up straight from the base of the tree like a bush. The branches are cut right down to the stump which then regrows in 3-6 years. Then the branches are soaked in water to soften the outer bark. If it rains during the cutting process then there is no need to soak the branches.

Then the outer bark and knots are scraped away to reveal a soft inner bark which is then peeled in almost paper thin layers. These are then dried. As it dries these thin slivers of bark curl up. After it is dried multiple layers of the thin bark are rolled into a cigar like stick. Click here for details on how it is made. It is soft, crumbly and easy to break into smaller pieces. However this labor intensive method of processing makes Ceylon Cinnamon much more expensive.


Ceylon Cinnamon tends be fragile and very delicate and very easy to break into small pieces to get its maxiumum benefits. Cassia Cinnamon by contrast is made up of one thick hard bark rolled into a cylinder like shape. At first both type of Cinnamon look similar, but lok closer and you will how hard the Cassia cinnamon sticks are.

Two Cinnamon sticks has daily values of 73% Manganese, 13% dietary Fibre, 8% Calcium. Manganese helps people with rheumatoid arthritis, Diabetes, epilepsy and many other ailments according to this article.. For detailed explanation of Cinnamon Nutrition values click here. 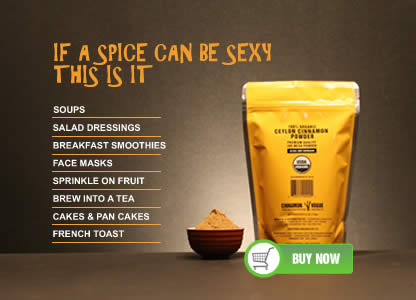 The FDA has not approved Cinnamon to cure any medical condition. This information is presented for informational purposes and is not intended to treat, diagnose or cure any illness. Consult a physician before taking any Cinnamon. If you are pregnant, nursing or have a heart condition you should definitely not take Cinnamon.