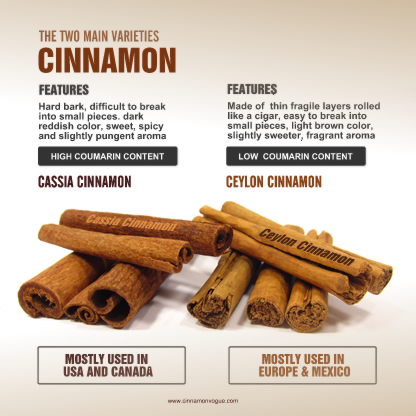 As the photo on the right illustrates the Cassia Cinnamon is a single rolled piece of bark from the Cinnamon Tree. its very hard,. dark reddish in color, sweet but also spicy. The Ceylon Cinnamon stick is made up of multiple layers of very thin fragile bark, that is light brown in color, extra sweet and mild to taste with notes of citrus..

Interestingly while both the United States and Canada consume Cassia Cinnamon, Mexico only consumes Ceylon Cinnamon. The reason for this is because Mexico inherited its Cinnamon tradition from Spain, its former colonial master. Spain brought Ceylon Cinnamon back to Europe about 400 years ago and developed a series of very sophisticated recipes using Ceylon Cinnamon. These recipes tend to use many spices including Cinnamon to create complex flavors. Because the United States is a relatively new country it lacked this culinary sophistication.

Most of the US Cinnamon recipes used the spicy and aromatic Cassia Cinnamon to create simple recipes. Many American's are also far too busy to create complex recipes. For example to make Mole a classic Mexican dish, it takes over 30 ingredients and a tremendous amount of skill and patience.


However Ceylon Cinnamon is fast becoming very popular in North America for two reasons. First it has ultra low levels of Coumarin, a substance known to cause liver damage. Since many people are now taking Cinnamon for a variety of health issues including diabetes and weight loss, Ceylon Cinnamon is considered the more suitable Cinnamon to take on a daily basis.

Secondly Americans and Canadian are discovering the subtle complexity of Ceylon Cinnamon in many recipes. Unlike Cassia Cinnamon which tends to be sweet and spicy, Ceylon Cinnamon is extra sweet and mild. It can be used in a variety of recipes to create complex layers of flavors, especially in savory dishes. For many Asian curries and Mexican recipes only Ceylon Cinnamon will give the correct flavor.