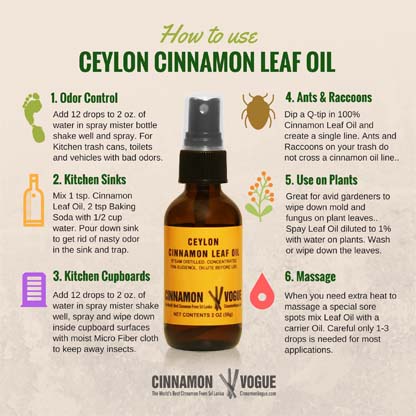 Discover how to use Ceylon Cinnamon leaf oil for odor control in the Kitchen sink, garbage bins and vehicles, wipe down counter tops, repel Ants and Raccoons, as a spicy hot massage oil and on plants.

Cinnamon Leaf essential oil, Cinnamomum verum, is relatively non-toxic; possible irritant because of the cinnamaldehyde. Eugenol is irritant to the mucous membranes: use in moderation. Can be a skin irritate, redden, and even burn sensitive skin so use carefully (no more than half drop per bath) Avoid in cosmetics and during pregnancy. Ceylon Cinnamon Leaf Oil has significantly less Coumarin (known to be toxic in relatively high doses) than the common Cassia Cinnamon. Read about the properties and uses of essential oils. Consult a knowledgeable reference for indications and contra-indications before use. Keep out of the reach of children