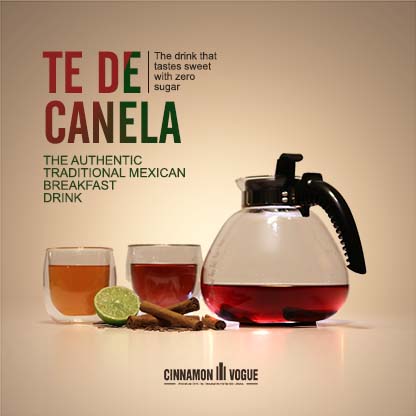 This is the authentic Mexican Te de Canela recipe like they make it in Mexico. It is remarkable good for your digestion and helps your stomach feel good. Naturally sweet and aromatic it can only be made with Ceylon Cinnamon.

Adding sugar is a definite no, because this cinnamon tea is naturally sweet and beautifully fragrant. You will be quite surprised at how sweet it is. Not sugar sweet but an earthy sweet. Besides adding sugar would make it something else. and not Te de Canela.

Ceylon Cinnamon is soft and crumbly and perfect for making Te De Canela. Although you don't have to, Ceylon Cinnamon sticks can be crumbled into small pieces for an even better brew. You can’t do that with Cassia Cinnamon which is hard.

Ceylon Cinnamon has a sweeter more sophisticated taste, with hints citrus and cloves. Cassia Cinnamon or virtually any other type of Cinnamon tends be more spicy with a more abrasive taste. You simply cannot have that for Te De Canela.


USE LIME, NOT LEMON

If you use lemon then the taste is very different. With the lime this Cinnamon tea is quite remarkable. The lime actually turns the cinnamon tea into a lighter shade and makes it even sweeter. Remember you need to squeeze a teaspoon of lime. Do not put in sliced lime as this will make the Te De Canela overly bitter and thus ruin a perfect blend. In fact it will destroy it.

If you follow the instructions to the letter, te de canela will deliver a mild, yet sweet and refreshing flavor with a comforting aroma. If you are taking Cinnamon for diabetes or even weight loss, then this is the perfect way to take it.

Te de Canela is prepared very much like a normal tea. It's a drink for any occasion, but particularly in the morning, after lunch especially if you have had a heavy lunch and just before bedtime. The  smell and taste of Cinnamon has an earthy feel to it, at once comforting and soothing.